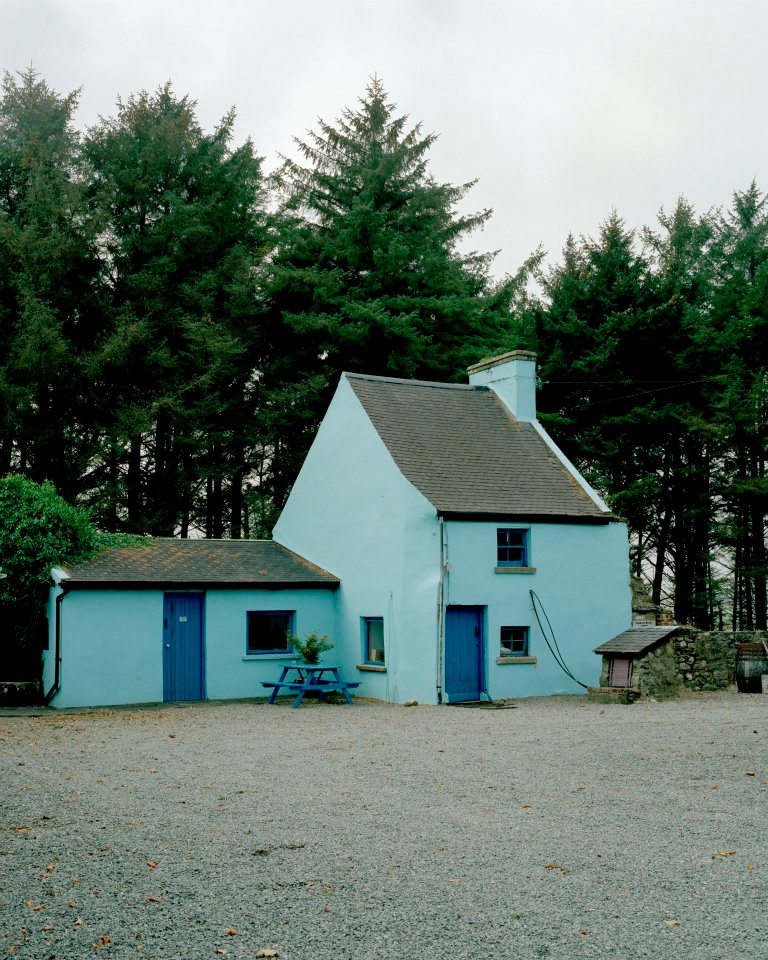 The cottage at the bottom of the yard where we make our rugs has seen many colourful characters come and go over the years. It was once an annex to what was Barrystown house and would seem to have been built on as an addition at some stage after the grander house was built. Today all that remains of that big house is the gable wall in which our fire place and chimney sits.

After the Barrystown house burned down in the late nineteenth century, we are told that there was a widower who came to live in the remaining cottage with his two very beautiful daughters and the yard became quite busy with local visitors of amorous intent.

But our connection with Barrystown began after that when Jim and Maggie Carton came here from north Wexford having purchased the yard and lands from the land commission.

Denis’s earliest memory of Barrystown is of aunt Maggie heading out of the yard in a pony and trap.

Her apple tarts are still fondly remembered also! They were particularly deep and filled with delicious apples from the orchard which adjoined the yard and was well established at that time.

The house as we now see it is small. It is now one up one down with an annex for a kitchen which once was a dairy where the butter was made. What we now use as a living room was then divided across the middle and the back room was reserved for eating.

Aunt Maggie’s “good furniture” was kept in here which was brought to Barrystown after her time working in the big houses in England. It was a tiny room at about seven by ten feet but space was made for the large sideboard and dining table none the less.

Another early memory from that time was of “Sunday September 4th 1960 a brilliantly sunny day when ‘the men’ were given permission by the parish priest to save the harvest even though it was a day of rest. Sandwiches tea and buttermilk were made up and sent over to The Hill Field where the corn was being cut. It was also the day when Wexford beat Tipp in the All Ireland hurling final, the radio blared and reports were sent out at intervals to the field.”

John and Mary Kenny were the next residents here. One story from their time here is of the house being struck by lightning. The lightning came into the house via the phone line. Mary was quite close to the phone when it was blown off the wall but was unharmed.

There was Paddy Monoghan after that. He was a retired seaman who loved poetry and reading.

I have some early childhood memories of the next resident who was Frances Brady quite a strong character.

She kept pigs for some time here when she first arrived. But that ended when an unattended lamp set fire to the old loft. You can still see the cindered beams in the floor of our yarn store today. The whole building was engulfed in flame which was brought to task by the fire brigade.

The following morning forms one of the darker memories of the yard that was recounted “a line of dead sows strewn along in front of the range of houses.”

Frances had a riding school after that and we still have visits from some of her past pupils who fondly reminisce. Our showrooms were divided into stalls then and I can still remember a nail in the wall by each where tack was hung, with the horses name in pencil above.

Frances left Barrystown for Ducketts Grove in Carlow where she lived out her days surrounded by her gang of assorted horses, ponies, dogs and cats.

Next in was Eddie Kearns. A farm labourer. He stayed here for a number of years in the 80’s. The house became known as”Eddies” to us as kids. We were fascinated by his Honda 50 and there were a few dubious attempts made at figuring it out! The name stuck though, and we still often refer to the cottage as “Eddies” today.

After Eddie the house was inhabited for some time by Denis Kenny who as you know was instrumental in creating Ceadogán as we know it today! He spent a few years here in basic enough conditions. Not much by way of plumbing apart from the old well at the door which doubled up as the fridge!

“People thought I was a bit odd, especially in winter when the yard was a marl hole. Calls from Fiona in Germany came via Padraig’s and Hilda’s house next door. We got married in 1981 and moved to more genteel surroundings in Carrig.”

It was the office and reception of Ceadogán Rugs for some time after that until its present day residents yours truly arrived.