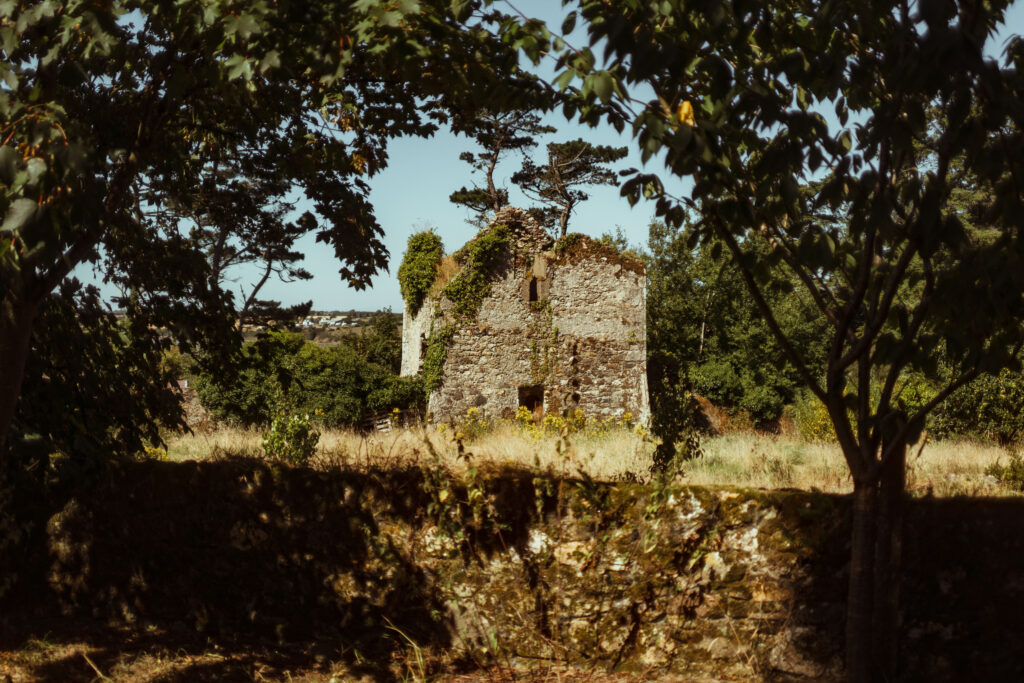 So we have set out our intention to integrate our business into its surroundings and we have a clear vision of where we want to go.

What’s next?
What first steps?
How do we establish our best route?

To truly get a sense of how to put our best foot forward we need to carefully examine what is here already, past and present. How have we have come to be here and how can we carefully hold all that comes up in that process of examination?

So let’s start with the past.

Like any other place Barrystown is steeped in history. We feel very lucky to call this particular place home and its history has been quite well researched and documented by a number of enthusiastic historians.

Our small and unobtrusive cottage at the bottom of the yard was once attached to a “big house” which was burned down in the late 19th century.

The earliest known dwelling here was in the 12th century when the first wave of Anglo Normans landed in Bannow Bay. Barrystown derives its name from De Barry and can be traced back to that period.

The NIAH estimates castle ruins which can be seen from our yard to have been built circa 1650. and list a yett (defensive iron grille), a murder hole and 12 musket loops in their description suggesting this place may well have seen some darker times!

Cromwell’s army camped in the field below the castle waiting for the low tide to cross the estuary by the Scar ford which borders the land.

As children our imaginations were taken with the story that a little over indulgence by the soldiers in the field as they awaited resulted in their missing the low tide and some heads rolled!!

Just across the estuary lie the monastic ruins of Clonmines. Once a thriving town that almost became a city where Vikings are known to have smelted ore and there was a significant population in medieval times.

In fact smelting happened here many times over the centuries. Silver and lead were found here and many earnest attempts were made to extract those resources with varying degrees of success. A solitary stack where the ore was smelted is all that remains of Barrystown silver mines which once employed between 102 and 120 people (including children!)

James Barry resided here in the 17th century and was involved in the 1641 rebellion. So his lands were forfeited during the Cromwellian settlement.

Next known owners were Kings. They remained until Barrystown house was burnt to the ground in the late 19th century. Circumstances are a little foggy but it is recorded as accidental.

Our story here begins when Barrystown was purchased by Jim and Maggie Carton in 1932 from the land commission for the princely sum of £300.

We have many stories of a more personal nature since that time, memories that have been passed along, characters who have lived in the odd little cottage at the bottom of the yard. We will dig a little into some of those next time.

We will sign out for now with a quote from Mrs. Anna Maria S.C. Hall, who wrote about Irish rural society, grew up in Bannow and was a frequent guest in Barrystown. She described Jonas King II and his house in Barrystown as follows:

The master was large; the house was large; the trees were large; the entrance gates were large; the worthy owner’s heart was large – and so was his purse. … his house, especially in the shooting or summer season, was always full of company, more numerous than select, but all resolved to enjoy themselves… his house … was almost magnificent … hall walls well garnished with fowling pieces, fishing rods, … antediluvian horns of a monstrous elk, … floor of beautiful Kilkenny marble; its polish certainly had departed… Dogs of various sizes … The dining room … massive sideboard … highly-wrought, antique plate … table on enormous pillars, bore evident marks of his residence there, Woodville, was very convenient for management of his properties in east Bargy.