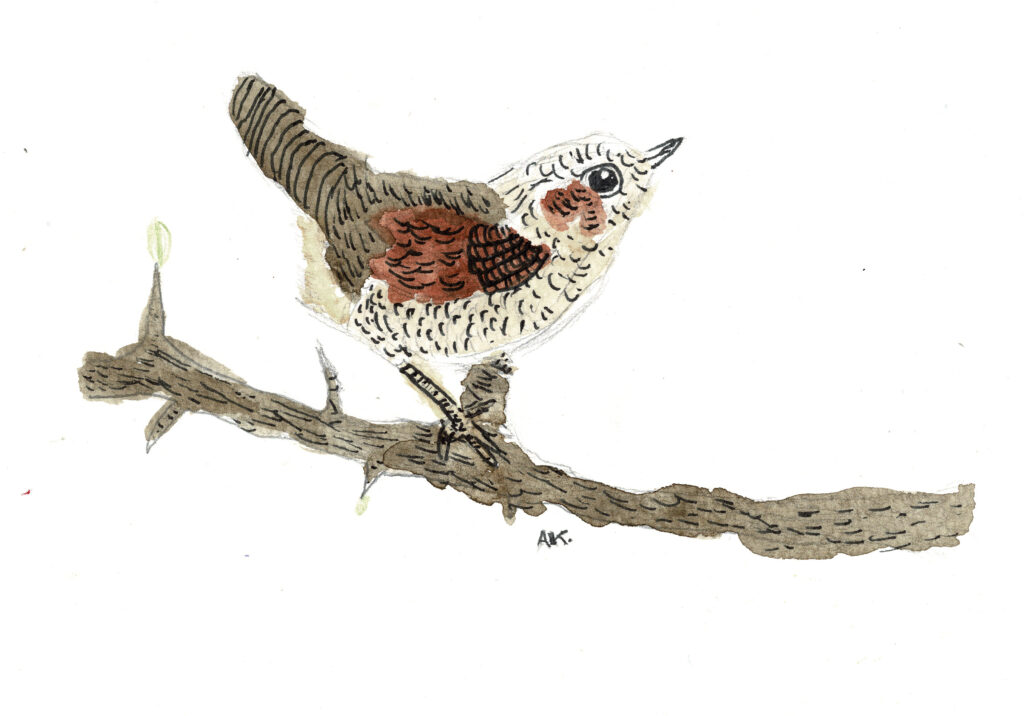 We’ve told you about some of the people that have lived in our home before us now, and learned some of the history that has has been etched into the fabric of this place.

Lets dive a little into our vision for what is to come.

Soon after doors were re-opened following that first covid lock down we were showing a client around our showroom. All of the windows and doors were open for ventilation to ease some of the post lock down anxiety. We were engrossed in conversation around one of our wall hangings when we noticed an unexpected visitor!

“Something flew into the room and landed on my head. I thought it was a bat, there are quite a few here in the old loft buildings.”

Perhaps we had disturbed one from its winter slumber while cleaning and hoovering earlier.

“I gently raised my hand to my head to encourage its departure, all the while trying to look calm so as not to alarm our client. To my amazement what then flew from the crown of my head was in fact a wren! King of the birds!”

We found it hard not to read some kind of divination into this wonderful moment, to read a message or meaning into the encounter.

She came in a mythic and magical way
When the wren flew in through our window today,

She gently lit on the crown of my head
King of the birds, she spoke for the dead
For the living and for all yet to come
Singing “now is the time to beat your drum”
“I am the feathered shield that you seek,
I am blackened spear tipped wing and beak
I am gannets dive and herons wade
I am the one that pierces the veil,
King of the birds?
Yes, I am the king.
Please sing with me now,
Sing with me now
Please sing”

So it was, on foot of this strange chance meeting that we became oficially “for the birds”

It is our attempt in as much as we can to answer the plea we felt we heard so clearly from an Dreolín beag, king of the birds that day.

We have had several similar encounters with some of our other winged and four legged neighbours which we will share with you in a later piece, but thats enough of the dreamy stuff for the moment!

Time to integrate, to make plans and set tasks.
To bring about a practical path along which we can move toward our vision.

Our intention as you now know is to support and create habitat for the wild life with which we share our home, we will do this while producing fibres to spin some of the yarns that we use in the making of our rugs.
We will use our unique vantage point to build a haven for all the creatures that live here and those that pass through on their migratory journeys.

The bird sanctuary that borders and forms part of the land here was the obvious place to begin.

We have many ideas around what we will use to produce yarns and have been exploring and experimenting with many of them. We were very pleased with some of the results so far, more information on these to follow also.

But our first step will be to identify who is here, who are the animals both winged and legged and who are the plants that have been here throughout all of the ages.

It is truly fascinating and humbling to think that these same plants and animals have born witness to all the many human activities that have gone on here. Many of which we have explored in our earlier articles.

They were here when Strongbow first sailed into Bannow Bay, and when the vikings smelted ore in Clonmines. They watched as Cromwells men made camp in the fields below our workshop or as the many attempts were made to mine the silver deposits from beneath the Corrach and Owen Duff rivers.

Those same calls and songs echoed across the estuary as they followed the same daily routines that were followed when Gerald DeBarri (whom our townland Barrystown, derives its namesake from ) wrote “topographia Hybernica” in 1188. His account of the flora fauna and people of Ireland of that time and the most influential work on Ireland circulating at that time.

So we have been listening carefully to those calls to get as clear a picture as we possibly can of who is here today. Who is doing well, and who may need our support.

There is quite a bit of information available to help us with this due to the estuary being classed as a bird sanctuary. But we’ve also had more than a little help from a few people who have been very generous with their time and skills.

We drew much inspiration from the work of Mary Reynolds who was so helpful when we were setting our intent and forming a clear vision for the journey.

We have also had the help of Tony Murray of the National Parks and Wildlife service in identifying the birds that are here and gaining an understanding of their needs and numbers. Hannah Denniston was also a great help in this regard.

We were so lucky again to have Paul Green nearby, a highly respected botanist who has walked the land with us and identified many of the plants that grow here.

We will take a closer look at what we found in our next rambling but for now heres a little piece of wren lore from Lisa O Neill.